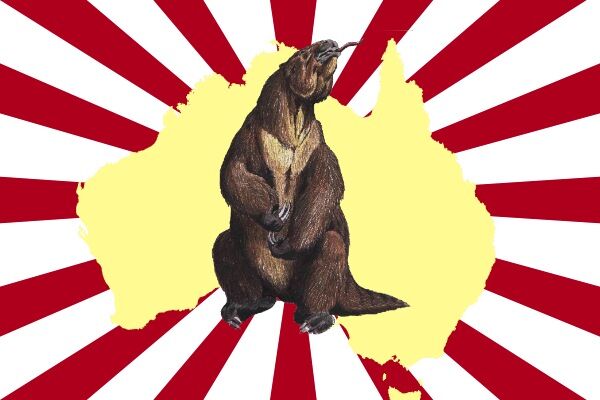 Australia is dominated by marsupials in this time and age, with placentals only occupying small niches. However in this timeline marsupials never diversified and became dominant in Australia; instead, a strange group of placental mammals called the xenarthrans traveled to Australia. Virtually without any sources of competition they proliferated and survived into this day, radiating and diversifying into a myriad of forms. Welcome to Xenarthra Australia.

Xenarthra is a group of placental mammals (infraclass Eutheria), once containing great behemoths such as ground sloths; but extant today only in the Americas and represented by anteaters, sloths, and armadillos; but what if they weren't just limited to South America. What if, when Antarctica, South America, Africa and Australia separated, xenarthra along with marsupials and ratites migrated to Australia? What if instead of marsupials becoming the dominant infraclass of mammals in Australia, xenarthra did?

Because of its size, there is significant variation in climate across the area. Low rainfall and hot summers are typical for the inland and west, a monsoonal 'wet' season in the far north, and warm, temperate conditions along the coastal strip. Elevated areas in the south-east inland can experience temperatures well below freezing in mid-winter. The climate of the coastal strip is influenced by warm ocean waters, keeping the region free from extremes of temperature and providing moisture for rainfall.

The Kappadons are a large family of xenarthrans inhabiting the eastern parts of Australia. They evolved from the ancestors of tree sloths, though they more closely resemble chalicotheres, rather than ground sloths. They are browsers, feeding on leaves and fruit high up in trees.

Another genus of interesting xenarthrans are Shifters – large omnivorous armadillos feeding on eggs of ratite birds, grass, eusocial insects and small animals. They posses large lower canines to root up food and a long tongue. Shifters have a thinner and more flexible shell to allow it to climb trees, due to that adaptation, it can't roll into a ball properly.

A predator inhabiting more sub-tropical parts of Australia is the Wenchrat, a medium-sized carnivorous marsupial, with a brown coat and black stripes. It has an acute sense of smell and is incredibly fast. It fills in a bear or cat-like niche and is one of the largest marsupials in Australia.

One of the most derived forms of Xenarthra, the Algor' 'is part of a predatory group of cursorial xenarthrans called Carnidesidians, all adapted to running, but retaining a plantigrade stance and very flexible arms. The algor itself is relatively small for a Carnidesidian, occupying a scavenger-forager niche, but can be very formidable prey with long-clawed front limbs.

Due to being outcompeted by anteaters, monotremes, especially echidnas, are far less diverse. One group is successful however; the Platypods are far more diverse than their alternate counterpart, having 4 species. They owe their success to being largely aquatic and not competing with other mammals.

Community content is available under CC-BY-SA unless otherwise noted.
Advertisement