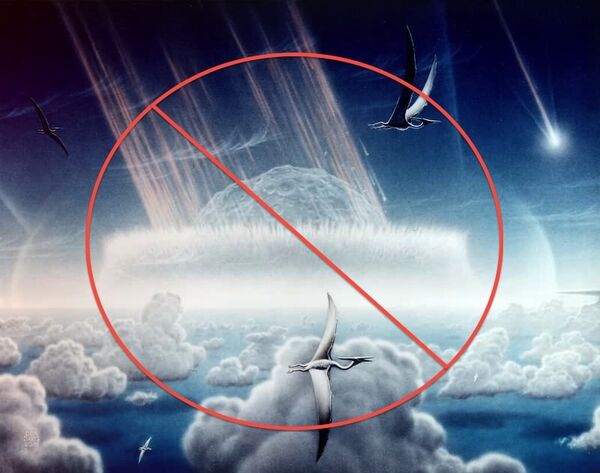 What if the Asteroid Missed? This is one of the biggest questions that paleontology has asked. Would dinosaurs continue to dominate megafaunal niches? Or would they eventually surrender their spot to the other great animals, the mammals or the crocodilians?

Due to the extreme randomness associated with travel through wormholes, in addition to travelling to this alternate timeline, humans arrived some 10,000 years earlier than what would be 2014 in the WitAM timeline, or roughly at the end of the Ice Age. During this time, much of North America  and Europe are being effected by immense glacial floods, and Iceland is in the throws of intense volcanic activity, roughly 30 times as much as it is on Home Earth. This makes much of the northern hemisphere quite cold and hazy, and this has caused the climate to be slightly colder and snowier than it would be otherwise. The southern hemisphere is relatively much less effected by the Iceland volcanism surge, and the air is very clean. Australia, Tasmania and New Guinea are all partly joined, as are most of the islands of South East Asia, the Bering Strait, and even a small bridge exists between the North and South Islands of New Zealand, resulting in a much greater portion of the earth being composed of dry land than it is in home earth (and will be in some several thousand years). The Yucatan Peninsula, which on home earth is a lush forest due to a flooded system of caves largely dependant on impact faults, is a large coastal swampy plain, similar to Florida, populated by the last surviving champsosaurs, and a large alligator population.

The largest difference from Home Earth is the possession of a proper second moon. The "moon", called Chicxul, is actually the original Chicxulub asteroid, which went into orbit after an extremely (at about the altitude of 150 km) close pass above what was at the time a shallow sea. Chicxul contains a large portion of reflective metals, which means that despite its very small size, it is a prominent object in the night sky at certain times of the evening. After its close pass, it flew out to an area just inside geostationary orbit, about 30,000 km above the earths surface, and has steadily got closer to the earth since then. It is expected to eventually collide with the Earth in some 35 million years time, possibly to cause a mass extinction, but that is outside the scope of this project.

The Deccan Traps eruptions start covering vast areas of the island continent of India, and in the process erupt out million of tons of sulfur dioxide. This kills off many of the large dinosaurs, including all large animals living in India, but some are not so easily stopped. This marks the end of the Mesozoic, but not the end of the rein of the dinosaurs.

The maniraptors, those most birdlike of dinosaurs, seem to be positively thriving, possibly due to the lack of large predators they had before. The situation isn't that simple, however. Both mammals and crocodylomorphs, even in the Cretaceous, seemed to be coming down hard on their dinosaurian counterparts, with crocodylomorphs evolving into such terrors as the 5 metre Baurusuchus, which had even managed to outcompete the theropods wherever they coexisted. The mammals too were becoming bolder, with many Late Cretaceous mammals becoming ravenous killers. The largest was Didelphodon, an otter-like animal bigger than a modern day Tasmanian devil, that was also found in the very same deposits that yeilded T. rex.

Mammals began to diversify around this time and started to get bigger. Some mammals, like the Euungulata and Primates, had their ancestry with small rat-like mammals about 65 million years ago, and have representatives in this timeline. The Carnivoramorpha also evolved around this time, but mysteriously died out in the Oligocene, leaving no descendants. The euungulates never diversified into the diversity of hoofed animals found on home earth, though they remained as small herbivores and predators on most continents. Some strange p-ungulates even filled niches of bears and canids, and became more omnivorous to even carnivorous, and grew to larger sizes. Cimolestans, while in the Cretaceous they never got bigger than a small cat, have evolved into monsters rivaling modern day big cats, and filling the void left by the absence of the carnivorans. These 'wargs' are the largest terrestrial mammals. Primates are less diverse than on home earth, with only prosimians like lemurs evolving. Some lemurs, however, also exploited the lack of carnivorans and evolved into arboreal predators, similar to the fossa (which, ironically, is a predator of lemurs on home earth), and even the leopard.

The terrestrial crocodylomorphs were little changed from the cretaceous, but as the grasslands started to spread, many species started to evolve longer legs for more efficient movement and to run down prey, and over time turned into monsters simewhat resembling gorgonopsids. They proved very successful in Africa and northern South America and became the dominant predators there. Crocodilians proper also evolved along a similar line in Australia, though enjoy more limited success due to their more aquatic habits.

Dinosaurs that were still present were almost all theropods, particularly maniraptors. In central Asia, the last oviraptorids evolved into the arctornithids, human sized birdlike omnivores that may be the most intelligent dinosaurs to evolve. In the Eocene, when Gondwana was still held together by a thread, a major group of predatory dinosaurs, known as the Notonychidae (nicknamed "notos" for short), evolved. These animals looked somewhat like the large groundbirds that inhabit Australia today, and may have evolved from troodonts which migrated south in the Paleocene. Notonychids survive today in the Americas, and evolved into the more robust australonychids in Australia. The maniraptors aren't the only group of coelurosaurs to survive to the present day, the tyrannosauroids have also done well. They are today represented by the American novotyrannids, and the Australian cheirotyrannids. The last non-coelurosaur theropods are the rokanes, noasaurid descendants that are common throughout Madagascar and southern Africa.

Other dinosaurs that have persisted include the ornithopods and ceratopsians. In Eurasia and Africa, ceratopsians dominate the giant herbivore niches, and are represented by the Eurasian magnacornibids and African elephaceratopsids. In the Americas and Australia, the ornithopods are dominant, and include the largest dinosaurs alive today, the North American profundosaurs. Sauropods have also persisted in Australia, and probable populations exist in South America.

Pterosaurs had relatively low diversity at the end of the Cretaceous, but when the world started to change in the Oligocene, they radiated extensively, with the Azdharchoidea being the dominant Cenozoic pterosaurs. An interesting path of evolution taken by nearly all members of this subfamily is the evolution of a serrated beak, which enables them to effectively hunt and kill the very largest of prey. This peak design is found in the Smaugids, robust volant predators, and the flightless Serragnathids, which are the largest pterosaurs, by weight, to have ever existed. The azdarchoidea also includes the Hydroazdarchidae, titanic fliers which can fly half way round the world in a single trip. Also presant are the South American Cirrids, the last of the Tapejarid lineage, which act as both predators and fruit dispersers.

In Australia, the much more primative Anurognathoid pterosaurs have presisted to the presant, and are some of the most vicious animals ever encountered by humans. Some adventurous individuals made it to New Zealand, and their descendants dominate the North Island.

The cretaceous marine fauna survived largely intact up to the ETM, but in this second extinction the aquatic realm was hit hard, with an extinction comparable to the one in home earth wiping out many of the animals that had survived for millions of years.

These examples include the Mosasaurs, though by then they had a variety of descendants, and the Hesperornithiformes, which perished due to an inflexible body design, competition with the more dominant polycotylids, and a lowering of the sea levels leaving most of their prefered habitat on land. Miraculously, both kinds of plesiosaurs arround at the end of the Eocene survived, most likely because they were specialised for an enduring food source.

Mosasaurs at the end of the cretaceous were identical to those in our timeline, but the acidification of the oceans due to submarine eruptions of the coast of India caused a marine extinction event compaable the home earth one. This wiped out the then more advanced Plioplatecarpine mosasaurs, and very nearly wiped out the tylosaurs, which survived by becoming specialised serpentine giants. Mosasaurine mosasaurs, in particular Plotosaurus, then radiated to become the largest and most formidable animals in the seas at that time, as the first members of the Piscisauroidea. Also found in relative abundance are the first Odobenocetids, descendants of the small mosasaur Globidens. There are also fragmentary fossils of a titan known as Basileviathan, the earliest known cetivenandid, which evolved out of the last tylosaurs in the palaeocene. All three groups would almost miraculously survive the ETM intact, and have easily dominated the seas since then. In Eurasian rivers, the mosasaur clade known as the tethysaurinae have evolved into aquatic crocodile-like predators, quite similar to short snouted champsosaurs, which are extinct outsice of southern North America.

Plesiosaurs have been second level predators since the mid late cretaceous, when the last of the pliosaurs died out. But the two groups which survived the cretaceous went on to live until the presant day, and were given an additional boost of evolution by the sudden extinction of hesperornithes in the middle Eocene.

Unlike tetrapods, fish and sharks survived with little problems, and large sharks are often seen at any dead carcass floating in the ocean. Bony fish have also radiated extensively, and ichthyodectiformes have taken over many predator niches, such as those of fast swimming perciforms and of carcharhinid sharks. Pachycormiformes have lost much of their diversity, but have taken up giant filter feeding niches.

Other casualties were Ammonites, which finally succumed to competition with squid and belemnites. Ammonites survive today only as a little known group of deep sea species.

For animals that people want to add that have yet to be approved.

Retrieved from "https://spec-evo.fandom.com/wiki/What_if_the_Asteroid_Missed%3F?oldid=30719"
Community content is available under CC-BY-SA unless otherwise noted.